Your cart is currently empty.

At Lezada, we put a strong emphasis on simplicity, quality and usefulness of fashion products over other factors. Our fashion items never get outdated. They are not short-lived as normal fashion clothes.

MANILA, Philippines — Rita Daniela and Ken Chan, also known as RitKen, were among the Kapuso stars who graced the recent Kapuso Mall Show in Davao City. Their “sojourn” was part of the GMA Regional TV effort to bring stars closer to Pinoy viewers. Prior to the show, Rita and Ken excitedly shared with select members of media about One of the Baes, a GMA Public Affairs production, their follow-up to the Afternoon Prime drama My Special Tatay.

“My character Jowalyn is one of the ‘baes’,” Rita introduced her latest character, which is a contrast to carefree Aubrey who fell for a mentally-challenged Boyet (Ken). “Her name is unique. She is boyish and dreams of becoming a captain of the ship. Mas pipiliin niya ang pangarap kaysa pag-ibig (She will choose to pursue her dreams over love). This is the first (time) that the concept about (the lives of) seafarers and the marine industry will be tackled on TV.”

The singer-actress continued the conversation by saying that “a lot of girls are being misinterpreted by the way they dress up.” Let’s face it: Some ladies prefer to dress down and to look sporty, androgynous, but they identify themselves as female. “At masarap naman talagang kasama ang mga lalake,” she said, “at hindi ibig sabihin na malandi sila. Masaya yung company nila (Being with the boys is enjoyable). I can relate to it because I’m one of the boys and I grew up surrounded by male cousins. That’s why I can easily portray Jowa. Sometimes, people think of them as lesbians. Kahit ganun siya (manamit) at makipag-usap, kinikilig pa rin (siya).”

Given those descriptions, One of the Baes, in which the word “bae” connotes “boy,” also touches on gender equality that a woman can foray into a male-dominated workplace. “Although there are woman-captains, but (the narrative remains) uncommon. That’s why it is also exciting,” said Rita. “Ipapakita namin na nasa eskwelahan kami, mga marine students kami and dun ko siya makikilala.” Ken collaborates with Peculiar Eyewear for a collection of computer, gadget protection eyeglasses and polarized sunglasses

Ken is Rita’s love interest named Grant. This new assignment will hopefully make viewers to less associate him to the trans woman Destiny Rose and the young father Boyet that Ken essayed well.

“I learned so much from (doing) Destiny Rose,” he shared. “Hindi ganun kalawak ang idea ko when it comes to transgender (my understanding about transgender was limited at that time). At first, kinakabahan ako, pati yung GMA. It was the first time that a story on the life of a transgender would be shown, hindi namin alam kung tatanggapin ng tao o hindi. Marami akong natutunan (katulad ng) kung ano ba ang ibig sabihin ng transgender, kung ano yung pinagdadaanan nila sa buhay... and I wasn’t afraid of the possibility that I would be typecast after that. Sabi sa akin sugal ‘to (that the show was a gamble). It was an opportunity for me to show (what I could do) on TV.”

With projects (including One of the Baes) that came his way after Destiny Rose, Ken has appreciated the beauty of portraying unconventional roles. By the way, Destiny Rose and My Special Tatay are broadcast in Thailand and South America (Costa Rica, Venezuela and Colombia). He is set to visit Thailand next month for Destiny Rose’s promotion.

“I think (it was the reason), malaking factor yung My Special Tatay,” said Ken of their latest TV team-up as a testament to the success of their previous show. “Malaking tulong sa amin ni Rita, it has opened a lot of doors to us.” Ken has his own eyewear collection named the Ken Chan X Peculiar, which is available on Lazada. It is a collaboration between him and Peculiar Eyewear. Personally chosen by the Kapuso actor, the collection offers computer and gadget protection eyeglasses and polarized sunglasses.

The Aubrey-Boyet pairing was unexpected, and again unconventional and won many hearts of Kapuso televiewers. 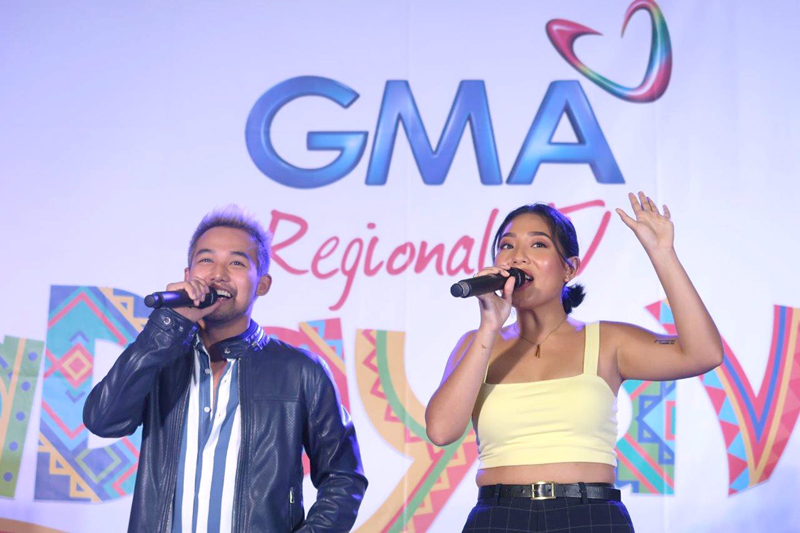 “I was not the leading lady,” said Rita, who was Anna in the Eto Na! Musical nAPO!. “I was the kontrabida.” If ever her work in My Special Tatay did help boost her career, she considered it a bonus, a manna from heaven. “I feel blessed that I was able to pull off each character that was given to me,” she said.

Rita and Ken’s small-screen chemistry and partnership was also seen on stage through My Special Love Concert. It was a natural progression since both can carry a tune. They recorded Kaba as the theme song of One of the Baes and first performed it at the SM City Davao. Rita also sang Bang Bang while Ken did 1 Like. With them to entertain Dabawenyos were Derek Ramsay and Andrea Torres, another Kapuso loveteam, and Gabby Concepcion.

“Ang laki ng difference ng mga (nagawa) naming teleserye before,” Ken compared One of the Baes to previous shows. “While we were doing My Special Tatay, Rita and I wished that we could do romantic comedy together. Nakaka-miss kasing gumawa ng light, ng kilig.” Good news was One of the Baes landed on their lap. “With this one, we will show the millennial side (of the story) and at the same time the ‘90s love feeling, which is the catch,” said Ken, whose character prefers love over work.

The two are also bringing to the new show the Alpha and “submissive” persona of their My Special Tatay characters that got the attention of Kapuso viewers. The conflict also lies on what matters more (between love and ambition) to Jowalyn and Grant, not to mention the romcom, sitcom genre where the feel-good narrative happens.

There are 0 Items In Your Cart.